Fuerth/Germany, 05/10/2020: Touch sensors from Kurz subsidiary PolyIC have been integrated into capacitive volume controls from the automotive supplier Preh. The control is located on the center console of the new Audi A3, model AU380. It can be conveniently operated by the front passenger and controlled either via a mechanical push function or capacitive touch function. The PolyTC brand name sensor ensures the reliable functioning of the capacitive touch operation – even after multiple uses, as proven by the rigorous testing of the automotive industry. PolyTC sensors meet the stringent service life requirements for components according to the VW standard and the specifications of other premium manufacturers.

The lasting durability of the sensors is attributable to the special process used to produce them. PolyTC sensors are manufactured in a roll-to-roll process whereby silver-based metallic grid structures (metal mesh) are transferred onto a PET film and sealed with another protective PET film. Despite this layer composition, the metal mesh structures remain elastic and flexible. This makes them resistant to the mechanical action of the push button function in the volume control. The electrical connection (tail) is produced concurrently with the touch control panel and does not need to be bonded in a separate work step. This, too, increases the service life because no mechanical connection exists between the tail and control panel. Furthermore, the sensors are protected against voltage breakdown by the sealing protective film. The resistance to ESD (Electro-Static Discharge) complies with automotive industry specifications.

The silver-based metal mesh tracks are characterized by their especially high conductivity, which ensures the reliable functioning of the sensors. This was proven in many mass-produced products with a focus on the home appliance and consumer goods industries. A further criterion for selecting the PolyTC sensors was their excellent optical transparency. The volume controls required optimally backlightable symbols. The structure of the PolyTC sensor tracks can be tailored to these product-specific requirements. Thanks to the three factors of durability, functional robustness and appearance, the touch sensors from PolyIC qualified for automotive series production. 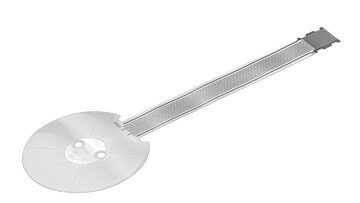