LEONHARD KURZ opens its own photovoltaic system in Sulzbach-Rosenberg

Sulzbach-Rosenberg/Germany, March 24, 2022: LEONHARD KURZ, a leading thin-film technology company, is celebrating the official commissioning of its new photovoltaic system in Sulzbach-Rosenberg. On an area of around 8.5 hectares, not far from the company premises on Eisenhämmerstraße, this means that after two years of planning and construction, one of the largest solar power plants in the region has been built. In the future, 14 million kilowatt hours will be produced here each year in an environmentally friendly manner – which will enable KURZ to cover around a quarter of its electricity requirements on site. Another special feature is that the electricity generated is fed directly into the company’s production.

With this large-scale project, the KURZ Group, headquartered in Fürth, is emphasizing its ties to the Sulzbach-Rosenberg region as well as its focus on sustainability. Peter Kurz, Member of the Management Board, confirms: “As a family business, it is important to us to take responsibility – for the region in which our story began, for the people who are based here, and for the natural environment that forms our livelihood.” Under the motto ‘Be a green leader’, the Group has consistently expanded its sustainability activities in recent years. In 2021, for example, KURZ joined the UN Global Compact Network, the world’s largest and most important initiative for sustainable and responsible corporate governance. An extensive sustainability report was published in February 2022, and KURZ has also had a certified environmental and energy management system in place throughout the company for many years. At both sites, in Fürth and in Sulzbach-Rosenberg, KURZ obtains its entire electricity demand from renewable sources – partly through purchased green electricity, and partly through its own photovoltaic systems. The company’s product and service portfolio will also be successively aligned to protect the environment and climate. Peter Kurz: “We’re serious about becoming the most sustainable company in our industry.”

The photovoltaic system was realized in close cooperation with Münch Energie from Rugendorf, one of the largest decentralized energy suppliers in Germany, as well as the local authorities. “As a major electricity consumer, KURZ has chosen the most effective form of energy supply – because the green electricity is produced locally and used directly,” says Mario Münch, Managing Director of Münch Energie. “In this way, the entire value creation remains in the region, and everyone benefits in the long term.” With the 27,000 high-performance modules installed in total, over 4,000 families could be supplied with green electricity every year. That’s a predictable amount of energy that ensures sustainable and affordable electricity procurement. Michael Göth, Mayor of the city of Sulzbach-Rosenberg, is delighted with the new photovoltaic system: “In this way, KURZ is drawing major attention to climate and environmental protection in our region.” Ralph Hopfensitz, member of the KURZ management and responsible for the Sulzbach-Rosenberg site, emphasizes: “We are very grateful for the professional cooperation with Münch and the municipality. It was only through this commitment that we were able to implement this major project so quickly. With the photovoltaic system, we can save around 6,000 tons of CO2 per year – an important step on our path to sustainability."

LEONHARD KURZ has been based in Sulzbach-Rosenberg since 1986 and currently employs around 1,200 people there. This makes the company one of the largest employers in the region. The company is one of the technology leaders in attractive and functional surface finishes used in countless everyday products such as cosmetics packaging, wine labels, and household appliances, as well as on plastic components for cars. Another mainstay is the creation of security features, e.g., for banknotes. The focus at the Upper Palatinate site is on transfer products for the graphic industry and products with holographic features. 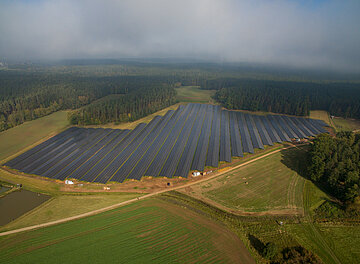