The plant in Sulzbach-Rosenberg will contribute to environmentally-sound and competitive production.

Sulzbach-Rosenberg/Hahnbach/Germany, 05/12/2019: In order to secure mid- and long-term competitiveness and jobs while, at the same time, significantly cutting carbon dioxide emissions, the Leonhard Kurz company plans to largely cover the energy needs of the plant in Sulzbach-Rosenberg with an open-air photovoltaic system. It is planned for the area of Hahnbach on an open space of 14.5 hectares, about 700 meters north of federal highway 14 on the von der Vogelloh to Süß road. During a walk-through, Kurz employees provided Mayor Bernhard Lindner and the local council with detailed information on the project.

"Our actions have always focused on energy saving and the sparing use of resources. With this project we take a major economic and ecological step forward," emphasized Ralph Hopfensitz, a member of the Board, "Our energy consumption is considerable,
and current plans have the photovoltaic system covering at least a quarter of that consumption, which in itself will save us about 6,000 tons of CO2 per year. This also brings us a step closer to our major sustainability goal of reducing energy-related CO2 emissions at the plants in Sulzbach-Rosenberg and Fürth by at least 20 percent by 2024."
The economic effect of the new plant is also significant. "The cost of power comprises a large cost pool at our company and is growing steadily," said Hopfensitz, "The price level in our sector and increased competition, especially from Asian companies, pose ever greater challenges". The photovoltaic system will help with the long-term planning of these costs. As an electricity-intensive operation, this alternative energy source will significantly contribute to securing our employment in the region". Since the space will no longer be used for agriculture, over time another natural shelter for flora and fauna will sprout.

The new facility will not harm the environment, it will be sown with grass and erected at a distance of at least half a kilometer from residential areas. Locally generated electricity from the photovoltaic system will not be fed into the grid like in conventional systems, but used on site in Kurz production. It will connect directly to the facility. "The local council would not have given this project so much consideration if the plant were not directly connected to the biggest employer in Hahnbach", summarized Mayor Bernhard Lindner.
The concept is being worked out and realized in the context of a strategic partnership with the Münch Energie corporation in Bavaria, one of Germany's biggest local energy providers. 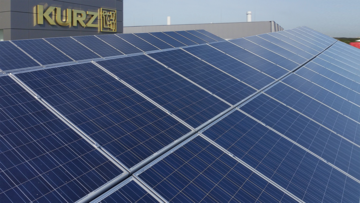